Verona is one of the great tourist cities in Italy. Only the city of Venice and perhaps Milan attract more visitors in northern Italy. Highlights in Verona are the many historic buildings in the old town, the Roman Arena and the house of Juliet from Shakespeare’s tragedy Romeo and Juliet. 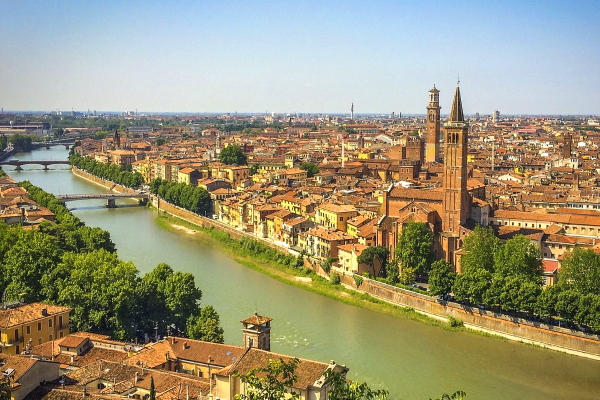 Verona lies directly south of the Alps. Anyone travelling from Innsbruck to Italy via the Brenner Pass will pass Verona. From Verona you can then head south to Bologna, Florence and Rome, east to Venice and west to Milan. This applies to motorways and main railway lines.

Verona’s main railway station is called “Porta Nuova”. It is about 1 kilometre outside the old town. If you walk from the station to the old town, you will pass the great sight of the ancient Arena Verona. The city centre is situated in a bend of the great river Adige. The city centre of Verona is the wonderful Piazza delle Erbe. Other popular sights such as the House of Juliet. Verona Cathedral etc. are only a few hundred metres away from the central Erbe Square.

Probably the biggest sight in Verona is the Arena. It is the largest surviving ancient stadium or amphitheatre after the Colosseum in Rome. The Arena was built around 30 AD and was a stadium for 30,000 spectators.

In ancient times, it was mainly fights with gladiators that took place here. For about 100 years, operas have been performed in the open theatre in summer. It is now one of the most famous open-air opera venues in the world. Operas by Verdi are performed particularly often. Performances are in the evening after dark, around 9pm. Very well attended, high quality performances, well worth it. But you can also visit the arena during the day without a performance. Tickets should be bought online in advance.

Verona is the city where Romeo and Juliet are set. You can visit the houses where Juliet and Romeo are said to have lived. However, this is very controversial. More famous and visited by many tourists is the house of Juliet (Casa di Giulietta), directly in the city centre. You enter through an archway into a backyard. The walls are scrawled with thousands of sayings. You can see the world-famous balcony. This is where the lovers are said to have sworn eternal love to each other. There is also a bronze statue of Juliet. Often very busy, crowds etc.

Verona city centre: Verona has a very interesting old town, one of the most beautiful in Italy. It is in the inner part of an arch of the great river Adige, which flows through Verona. The important square in Verona’s old town is Piazza delle Erbe. Around the Erbe square are some important buildings like Palazzo Maffei, also the fountain in the square is very famous. 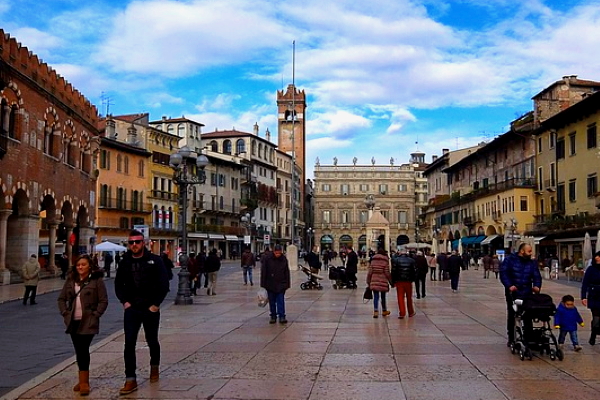 At the back of the old town, you should definitely visit the Cathedral of Santa Maria Matricolar, one of the great sights of Verona. In the cathedral, above the altar, you should take a look at the famous painting by Titian Assumption (Italian Assunta, 1518). This is one of the great works of art in Verona. You pay a small entrance fee to the cathedral (about 2.50 euros).

The largest lake in Italy, Lake Garda, is only 20 km from Verona. Many tourists from Germany and nearby Austria come to this lake.