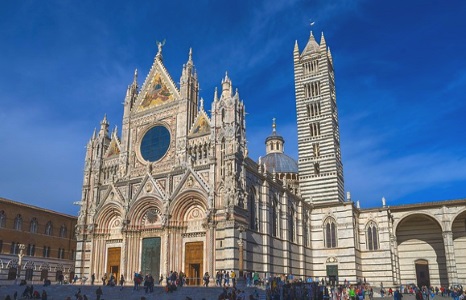 The most important / Overview

Highlights in the cathedral of Siena are mainly works of art, especially the world-famous pictures on the floor of the church. The Piccolomini Library in the church, the baptistery, the crypt under the cathedral and the museum of the cathedral inspire millions of people every year.

The tickets for the cathedral are valid for all parts of the church and for the museum. It is better to buy the tickets in advance on the internet, this saves the often long queues. We recommend the excellent ticket website Getyourguide to buy tickets

In principle, there is only one important ticket. It is valid for all sights in the cathedral such as the church itself, the famous library, the baptistery (baptistery), the krypta in the basement, the cathedral museum of Siena and much more. These tickets are valid for 3 consecutive days, so you don’t have to visit everything in one day.

These tickets are available on the spot and on the Internet. If you buy the tickets online, you might save a lot of waiting time at the cash desk. At many big sights in Tuscany, there are long queues every day.

The ticket price depends on the season. In the summer season, the tickets are more expensive than in the winter. In summer the entrance fee to the cathedral is 15 Euro (as of the beginning of 2020).

The tickets on the Internet with quick admission cost 17 euros. More information and booking on the excellent ticket website Getyourguide.

The cathedral of Siena can be visited every weekday, so there is no rest day.

The following opening hours apply in the season (March to October): daily from 10:30 to 19 o’clock. Exception: On Sundays and holidays the cathedral opens for visitors only at 13:30 and closes already at 18 o’clock, since a service takes place in the morning.

Due to church services, the opening hours are sometimes somewhat shortened, for example the cathedral closes one hour earlier in the evenings before some church holidays.

Shorter opening hours in winter: In the months November to February the cathedral closes already at 18 o’clock, on Sundays / holidays at 17:30.

As far as we know, all other sights in Siena Cathedral have similar opening hours (Krypta under the Cathedral, Cathedral Museum, Library, Baptistery, etc.). Some, unlike the cathedral’s main building, are also open on Sunday mornings.Anfahrt Dom Siena

The cathedral is of course in the middle of the old town and only a stone’s throw away from the large central square Piazza del Campo.

The main train station in Siena is unfortunately a little outside the centre, the walking time from the train station Siena to the cathedral is about half an hour. It is best to walk up the long escalators from the station to the city centre (through the shopping centre). The old town of Siena with its cathedral is on a small hill about 100 metres above the station.

Siena is not a really big city (about 50.000 inhabitants), most of the big sights can be reached on foot.

The cathedral church with the actual name “Cattedrale di Santa Maria Assunta” is already from the outside a real eye-catcher. We particularly liked the façade with its pattern of light and dark marble. The architectural style of the cathedral of Florence is predominantly Gothic, it comes largely from the 13th century. But many works of art in the interior of the church originate from later epochs. Quite a few are, how could it be otherwise in Tuscany, from the Renaissance period.

Floor: Perhaps the most important works of art in southern Tuscany are the more than 50 large mosaic pictures inside the church on the floor, unique in the world! The pictures mainly show scenes from the Bible. Unfortunately, some mosaics are temporarily covered, so as a visitor of the cathedral, you cannot always see all of them.

Very important is also the pulpit of Nicola Pisano with the well-known lion figures made of marble (see picture ). 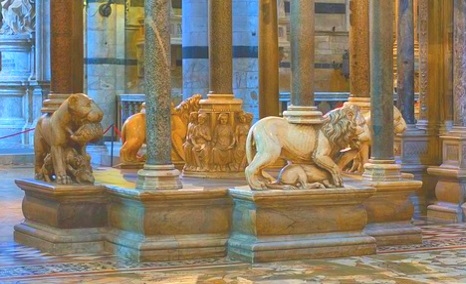 The famous pulpit with lions in the cathedral Siena 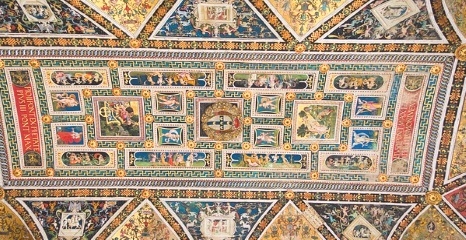 Also some works of art on the ceiling of the cathedral are grandiose.

The so-called Facciatone is also included in the admission price of the cathedral ticket. It is a vantage point on a kind of high balcony opposite the cathedral. You have to go up a long staircase.

Altogether the Dom Siena has a lot to offer for visitors. We think it is about as much as the Cathedral of Florence and more than the Cathedral of Pisa. The cathedral Siena is next to the Piazza del Campo a few meters away with the Palazzo Pubblico the most important sight in the southern part of Tuscany.

Other big churches in the Italy

Cathedral of Florence with the great dome.

Cathedral of Pisa with the famous Leaning Tower.

St Peters Vatican, the most important church in the world.