The dome of the Florence Cathedral is, in our opinion, the greatest sight in Florence.The dome is a miracle of technology. Actually it was impossible to build such a gigantic dome in the 15th century. The builder Filippo Brunelleschi managed it nevertheless, although he was no architect at all. 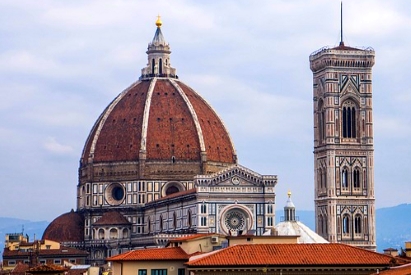 The gigantic size of the cathedral dome of Florence

The dome on the cathedral has a diameter of 45 meters. It is almost as big as one half of a football field. The church dome rises 107 meters into the sky. Thus the dome of the cathedral of Florence has a larger height than the church tower. 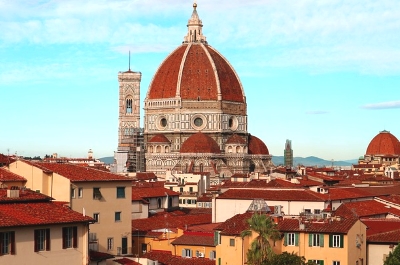 Higher than the Campanile (Tower of the Cathedral)

Four million bricks were used. Both the production of so many bricks and the lifting of the many building materials to such a great height were never before accomplished masterpieces. The inventor Filippo Brunelleschi built a completely new lift for the many bricks and the mortar. It was operated with two oxen walking in a circle.

Visitors to the dome

The highlight is the ascent to the dome, but one should also look at the building from the inside.

Climbing the dome is possible for tourists and the highlight of the trip for many Tuscany vacationers. The problem is that Florence is one of the top destinations in Europe and only a limited number of people can climb the dome. This means that there are sometimes enormous waiting times all year round. Quite often the queue at the dome entrance is several hundred metres long. But you can avoid the queues if you nook a tour (see yellow box).

You should be fit enough to get out and have no fear of heights, claustrophobia etc..

Viewing the dome from the church

The dome can be viewed from the inside of the church. The dome was painted by Giorgio Vasari and Federico Zuccari between 1572 and 1579. The 4000 m² fresco is considered to be the largest in the world (The World Judge or The Last Judge).

The problem is that from below up to 100 meters away you can hardly see any details in this beautiful work of art. Until the invention of binoculars, it was almost impossible to see. We strongly recommend to bring a good pair of binoculars or a camera with a good zoom or similar into the cathedral to see the masterpiece “The Last Judgement” in detail. Some cathedral visitors spend hours under the magnificent dome

Short film: Inside the dome with “The Last Judgement” by Vasari

The story of the construction of the cathedral dome

After a long construction period the cathedral of Florence was finished in large parts, the inhabitants of the city had a problem. Nobody knew how to build such a large dome. The hole in the ceiling of the cathedral had a diameter of about 45 meters. Never before had such a large church dome been built until this time (beginning of the 15th century). They looked for solution and they draf a courageous decision.

Actually, such a construction is impossible. The millions of bricks have such a high dead weight that such a dome has to collapse during construction. Among other things, Filippo Brunelleschi invented the so-called herring system. The bricks are arranged alternately lengthwise and crosswise. This gives the walls much better stability.

Some experts even think that the work of the goldsmith Brunelleschi is the greatest achievement in architecture in the history of mankind. We do not know exactly how Brunelleschi built the dome 600 years ago. The famous professor of architecture at the University of Florence Massimo Ricci has been reconstructing the dome of Florence in a 1:5 scale model for many years. The “small dome” can be found in the park “Parco Dell’anconella” 3-4 kilometers east of the cathedral on the other side of the river Arno. 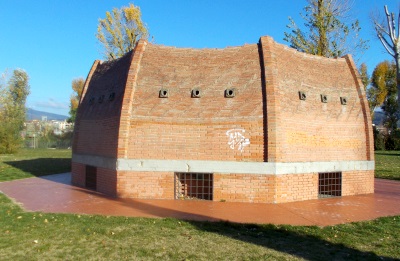 The unusual arrangement of the bricks (herring system) is clearly visible from close up.