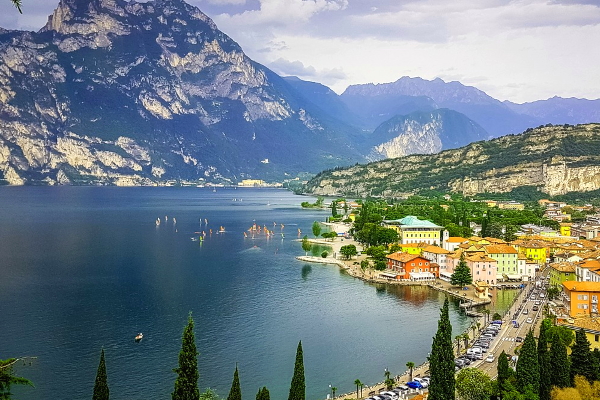 Lake Garda (Italian: Lago di Garda) is a large lake, once around the lake by car takes several hours. The body of water has a circumference of about 160 kilometres. Lake Garda has a length from north to south of just over 50 kilometres and a width of about 18 kilometres from east to west. It is a deep lake, the lowest point of Lake Garda is 346 metres, almost 300 metres below sea level. The surface area of Lake Garda is about 370 km².

The lake is located in three regions of Italy: Veneto, Lombardy and Trentino-Alto Adige. Veneto includes the entire eastern shore of the lake, and most tourists come to this part of Lake Garda. Lombardy includes an equally long part of the shore, the entire western shore with the largest town Desenzano del Garda. The smaller northern tip of Lake Garda belongs to Trentino. We have assigned Lake Garda to Veneto in this online travel guide. This is the part where most of the tourist resorts are located. The west coast in Lombardy, on the other hand, is less populated, a great hiking area. 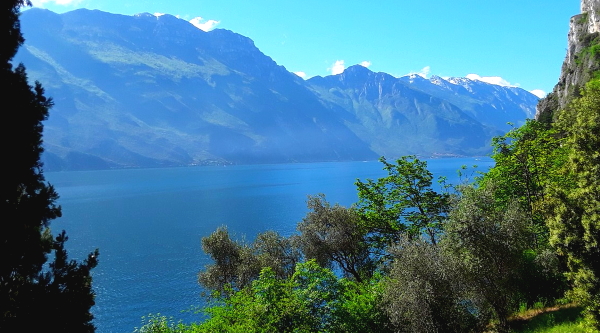 There are five islands in Lake Garda. The most famous island is Isola del Garda. You can only visit the island in summer as part of an organised guided tour. The island of Isola di San Biagio has many more visitors. There are ferries to this island, and when the water level is very low you can also reach it on foot. Both islands are in the west of Lake Garda.

Gardaland amusement park: The largest amusement park in Italy is in the south of Lake Garda near the town of Peschiera del Garda. There are over 30 rides in the Gardaland amusement park (from the areas such as adrenaline, adventure, fantasy), musical, circus and much more, there is something for everyone. You should definitely plan for the whole day. In our opinion, Gardaland is one of the best amusement parks in Europe. For children and adults. Tickets should be bought online in advance. More information and tickets can be found on this website.

The north of the lake is in the Alps, the south is already in the great plain of the great Italian river Po. Many tourists in the north go hiking or climbing in the mountains. Mountain biking is also popular.

The big city on Lake Garda with 30,000 inhabitants is Desenzano del Garda in the southwest of the lake. not far away is Sirmione. This small town is one of the most beautiful on Lake Garda. The old town with its stone houses from the Middle Ages is well known. The thermal springs of Sirmione have also attracted many people for thousands of years.

A great place in the east of the lake is Salò. The old part is known as a shopping mile. The long promenade along the shore of Lake Garda is also beautiful, with many nice cafés and restaurants. The famous Salò Cathedral is also a must-see inside.

Riva del Garda is the largest town in the north (just under 20,000 inhabitants). Many mountaineers and water sports enthusiasts come to this town. Sailing and surfing are very popular in Riva del Garda. In Limone sul Garda, a few kilometres further south on the western shore, everything revolves around lemons, a fruit that is grown in large quantities around Lake Garda. Beautiful old town. narrow town. it goes steeply uphill on slopes. 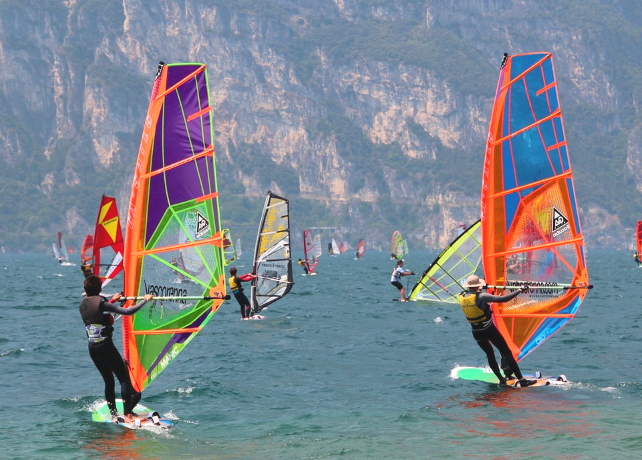 Climate Lake Garda: The summer on Lake Garda is Mediterranean warm. In July and August, temperatures reach over 30 degrees in the afternoon on many days. However, it rains more on Lake Garda in summer than further south in Italy. Winters are warmer than in Germany, but light night frosts are not uncommon between December and February, even directly on the lakeshore. Swimming in the lake is pleasant between June and September (water temperature 18 Gard or higher). The month with the most sun is July. The warmest month on Lake Garda is also July, followed by August and June.

How to get to Lake Garda: You can reach Lake Garda from Austria and Bavaria via the Brenner Pass. The motorway from Innsbruck via the Brenner Pass, Bolzano and Trento continues a few kilometres east of Lake Garda to Verona. The metropolis of Verona is only about 20 kilometres from Lake Garda. The Verona – Milan train line (mostly hourly connections) runs along the southern shore of the lake. There are good bus connections along the shore of the lake, especially in the season. Even more popular with tourists are the many ferries on Lake Garda. Practically all places can be reached by public boat.

Other large lakes in Northern Italy include Lake Como and Lake Maggiore.