The Palazzo Pubblico is a large building with a high tower on the central square Piazzo del Campo in Siena (Tuscany, Italy). It has been the town hall of the city for many centuries. For tourists, two things are especially interesting: On the one hand, the corridor to the tower Torre del Mangia with a great view. On the other hand, the visit of the palace with the city museum Museo Civico with famous wall paintings (frescos).

Ascent of the Torre del Mangia

It goes up more than 400 steps, the town hall tower of Siena is 102 meters high. From the top you have a great view of Piazza del Campo (see picture below), Siena and the surroundings of the city. 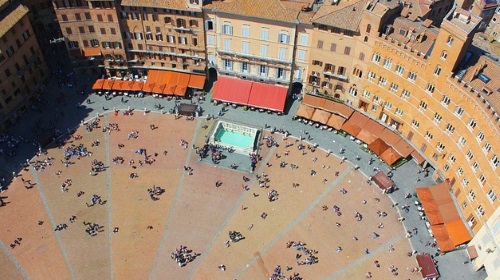 At the great time of Siena, the 1st floor of the Palazzo Pubblico was the important government rooms. It was here that important meetings were held and where major decisions were made. Today this first floor is a museum. The Museo Civico is famous for some frescoes on the walls.

Sala del Mappamondo (Room of the World Globe): A large globe used to be here, but unfortunately it is no longer there. Very famous is a picture with the riders Guidoriccio da Fogliano. No less interesting is the picture “Modonna on the throne with child” by Simone Martini on the other side of the largest room in Palazzo Pubblico.

Visitors to the Museo Civico can go one floor higher. You are at a viewing terrace or loggia with a good view to parts of Siena and the surrounding area.

The museum costs 9 Euro entrance fee, for the ascent of the tower you have to pay 10 Euro.

There is a combined ticket (Torre des Mangia, Museo Civico and Museum Santa Maria della Scala) for the entire entrance fee of 20 euros.

Children under the age of 11 do not have to pay admission.

There are family tickets (e.g. the combi-ticket above 2 adults with children 40 euros).

It is open almost every day of the year, only on very important holidays like Christmas the palace closed for public.

If you have a combi-ticket: The “Santa Maria della Scala” has a day off on Tuesday.

>>> Overview of all Sights Siena