The Da Vinci Museum is an interesting exhibition in the centre of Milan. On the one hand, you can see replicas of many great inventions by perhaps the most ingenious man who ever lived. On the other hand, it is about the world-famous paintings by Leonardo da Vinci. Especially the painting The Last Supper, which can be seen in Milan. 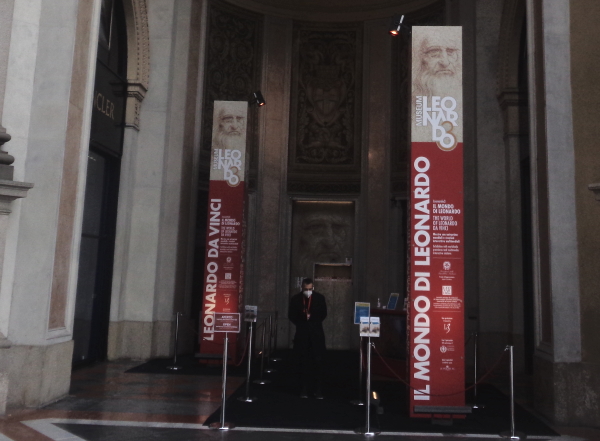 The Leonardo da Vinci Museum Milan is located in the centre of the city between Milan Cathedral and La Scala Opera House (each about 150 metres away). It is at an exit of the Galleria Vittorio Emanuele II shopping centre.

Bus Milan Airport: Malpensa Airport is far from the city, travel time almost an hour. Taxis are very expensive. We recommend the airport bus. You can book this cheaply online in advance.  You can find more information and tickets on this link.

After the ticket office, there are several rooms with Da Vinci’s inventions, all wooden replicas several metres high. Among them are flying machines, weapons, a mechanical lion, ships, submarines and much more. Leonardo da Vinci was not only the best painter in history, but also probably the most ingenious inventor. As early as the year 1500, he made drawings and construction plans of things that were not actually invented until several hundred years later.

The rooms at the back of the Da Vinci Museum in Milan are entirely dedicated to his paintings. There is the Mona Lisa on display, a self-portrait and the gigantic statue Cavallo di Leonardo (Horse Statue).

One room is entirely dedicated to the famous painting “The Last Supper”, the original of which is in a church in Milan about 1 kilometre away. On one wall, the painting can be seen illuminated in a size of several metres. On monitors, you can play with the picture using joysticks and the like. On one device, for example, the picture is displayed pin sharp. You can enlarge sections, etc.

Nothing in the Da Vinci Museum in Milan is original to Da Vinci. Everything is a replica, a copy, an imitation and the like. Nevertheless, it is a very interesting museum. We think that everyone who comes to Milan should go inside.

The museum “Leonardo Da Vinci Milan” has several names. It is officially called “Leonardo3 Museum”. You can also read “Il Mondo di Leonardo” or translated “The World of Leonardo”. This always refers to the same exhibition.

Ticket Milan Cathedral: There is one ticket for the entire cathedral / access to the roof / cathedral museum and crypt (cathedral cellar). On site there is only one sales point opposite the cathedral. The queues there are often extremely long. Therefore, be sure to buy your ticket online beforehand:  The Dom Tickets are available on this website

>>>  Our articule about the Leonardo da Vinci Museum Florence

>>>  Our articule about the Leonardo da Vinci Museum Venice