Hard Rock Cafe is one of the most famous cafe and restaurant chains in the world. It exists in over 70 countries. The first cafe opened two Americans in the 70s in London. Soon branches were opened in the USA, later on all continents.

In Italy there are three Hard Rock Cafes in the three largest tourist resorts Rome, Venice and Florence. This is Florence is centrally located in the city, about 200 meters from the cathedral. There is American food like huge hamburgers, but also other international dishes. Coffee, beer and other drinks are served, as well as mostly pretty good rock music. In the late evening, the Hard Rock Cafe Florence is often a party atmosphere with lots of alcohol etc. 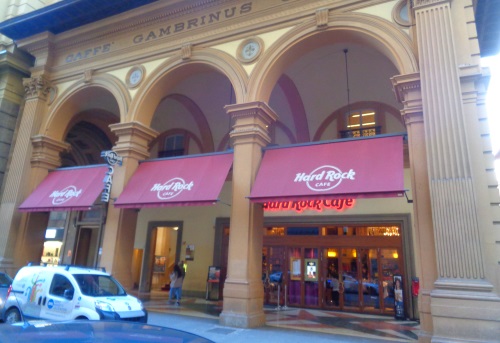 The Hard Rock Cafe Florence is often full, there are queues at the entrance. Sometimes you have to wait for hours to get a table. But you can reserve a table. But you have to order a menu right away. We recommend, although the portions are large, to take the large menu (Diamond Menu), since it only costs about 3 euros more.

All cafes of the chain in the world are quite similar, also from the menu and the prices. The prices are not exactly a bargain, but the portions are very large. Besides it is simply a unique experience to have visited a Hard Rock Cafe once. There is usually good rock music, sometimes bands play live. As I said, make sure to book in advance. On site in Florence you have at most in winter a good chance to get a table like this. Often very long queues.

The cafe is right in the center. Parking is very difficult in the area. Moreover, as a tourist you are not allowed to drive into the city centre of Florence (more about this here). But the city centre is small and everything is within walking distance.