Trento is a city in northern Italy in the Alps with 120,000 inhabitants. In German, the city is called Trient. It is the capital of the Italian province of Trento and of the whole region of Trentino-Alto Adige. It is a well-known university town with about 15,000 students, more than 10% of the population. 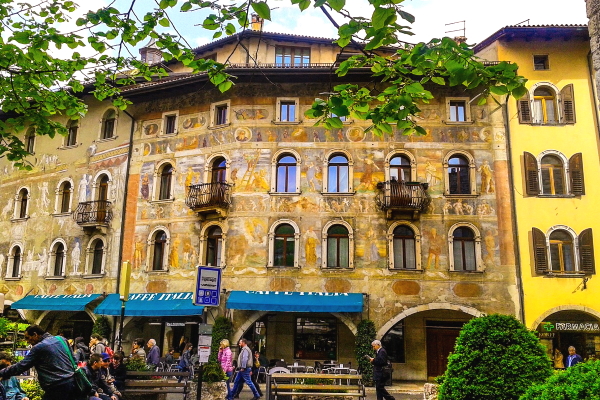 Trento is at an altitude of 200 metres above sea level on the river Adige (Italian for Adige). Due to its low location, Trento is therefore much warmer than central Europe or most parts of the Alps.

Trento is about 100 kilometres north of Verona. It is a similar distance to the Brenner Pass on the Austrian border in the other direction. Bolzano, the capital of South Tyrol, is about 40 kilometres away, Rovereto to the south just under 30 kilometres. All the cities mentioned are on the so-called Brenner motorway from Innsbruck over the Brenner Pass to Verona.

Trento has an old town worth seeing. The cathedral square is considered the centre of Trento. The railway station is just a few minutes’ walk north of the old town. There are frequent train connections on the route Munich – Tyrol – Brenner – Bolzano – Trento – Verona.

The Adige, the major river in the area, flows through Trento from north to south, west of the old town.

There are high mountains around Trento, the city is in the middle of the Alps. The name of the city of Trento probably comes from the number 3, meaning three high mountains between which the city lies.

Places of interest in Trento

The very famous fountain in Piazza del Duomo (Neptune’s Fountain) is considered by many Trento residents to be the central point and meeting place in their city.

The Cathedral of Trento (Cattedrale di San Vigilio) is a must-see. Some of the frescoes, the altar and the Chapel of the Cross are particularly worth seeing. The Neptune Fountain in Baroque style is certainly one of the most beautiful fountains in northern Italy. It stands in the middle of the cathedral square.

The Tridentine Diocesan Museum (museo diocesano tridentino) on Cathedral Square in an old palace is great. Here you can find paintings, altars, sculptures, tapestries and much more. Large museum on 4 floors, entrance fee 7 euros. From the top floor you can enter the cathedral at the very top under the roof. Great view of the interior of the cathedral. Perhaps the best museum in Trento.

A completely different, but equally interesting, museum in Trento is the Trento Science Museum (MUSE – Museo delle Scienze Trento). Much of the museum revolves around the themes of the Alps or high mountains and animals. Large museum about south of the city centre between the railway and the Adige river. Entrance fee 10 euros, various reductions, closed on Mondays.

Another major sight in Trento is the huge castle Castello del Buonconsiglio directly north of the old town. In former times, the castle was the seat of the bishops of Trento, today there are several interesting museums in the complex.

You should definitely walk through the centre of Trento. The most beautiful street is Via Gianntatonio Manci with several palaces and other old houses. This is also the seat of the local alpine association SAT with a small museum.

You should also stroll through the city park Giardini Pubblici, right in front of Trento’s train station.