The Genoa Aquarium has become one of the biggest attractions in the whole of north-west Italy. It is one of the largest aquariums in the world and by far the largest in Italy. Several thousand visitors come every day, more than 1 million per year. The entrance fee is quite high, around 30 euros. Long queues often form in front of the entrance. If you don’t want to stand in line for a long time, you should buy your tickets in advance on the internet.  >>> Tickets are available on this link 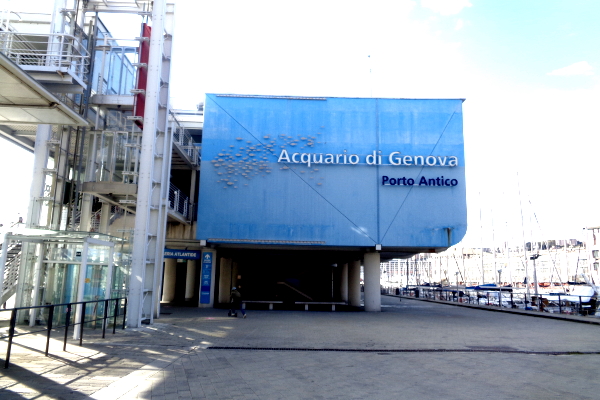 The aquarium is in the old port of Genoa right next to the famous old town in the centre of Genoa. It is a gigantic, modern building. The zoo for aquatic animals was opened in 1992, 500 years after Columbus, who was from Genoa, discovered America. Since then, the “Acquario di Genova” has been significantly expanded. Genova is the Italian name of the city.

The Genoa Aquarium now covers an area of about one hectare (10,000 m²), other sources on the Internet even speak of over 2.5 hectares. There are about 600 different animal species to see. Most of them are fish, but there are also dolphins, turtles, lizards, penguins and many more. There are dozens of large tanks for the marine animals. The dolphins of the Great Tummler species have a gigantic tank outside, while the other animals live in the building that is built in the harbour out into the sea. 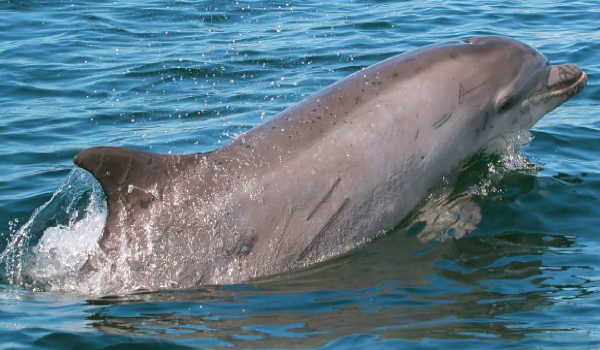 There is also a restaurant in the aquarium. You can get burgers, sandwiches, salads and the like. Not very cheap. A burger with fries around 10 euros, a coke 3-4 euros. But there is also a small picnic area outside. In the middle of the harbour, between the yachts, you can eat the food and drinks you have brought yourself. 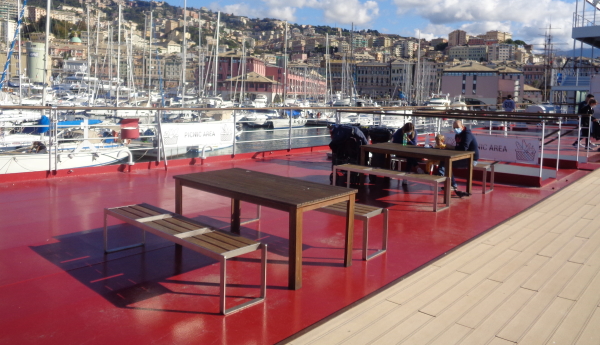 You can take photos in the aquarium without a flash. In some tanks it is a bit too dark for that. Long exposure is also difficult because the animals are moving.

The Genoa Aquarium is large. There is a fixed path, if you follow it you won’t miss anything. If you just run through it, you might need 1 hour. If you want to take a closer look at all the animals, etc., you’ll be busy for 2.5 to 4 hours.

Our opinion of the Genoa Aquarium

We thought the aquarium was great. Especially the big animals like dolphins, sharks, manatees etc. are interesting. Animals that you don’t see in every zoo. Everything is well done and modern. The additional things like fish to touch for children are not bad either. The signs on the fish tanks etc. are in Italian and English. From our point of view, the elaborate reproduction of the animals’ natural environment is also very well done. We were particularly impressed by the enormous size of the Genoa Aquarium, with about 70 rooms and 12,000 animals.

On the negative side, we noticed the rather high entrance fee of about 30 euros (but there is a lot on offer). Also annoying are the long queues and extreme waiting times at the entrance, if you don’t buy a ticket in advance on the internet. >>> Tickets are available on this link

Due to the size of the aquarium, there is not much of a crowd after entering the building.

Overview of animals and other attractions at Genoa Aquarium

This list is far from complete. These are animals that we liked and remembered.

Manatees: We have never seen these anywhere else, although we have been to many aquariums and zoos. Perhaps the largest animals in the Genoa Aquatic Zoo.

Penguins: (species Humboldt penguin). This species lives mainly in southern South America and on islands. Unfortunately, you can only see the penguins through a glass pane. 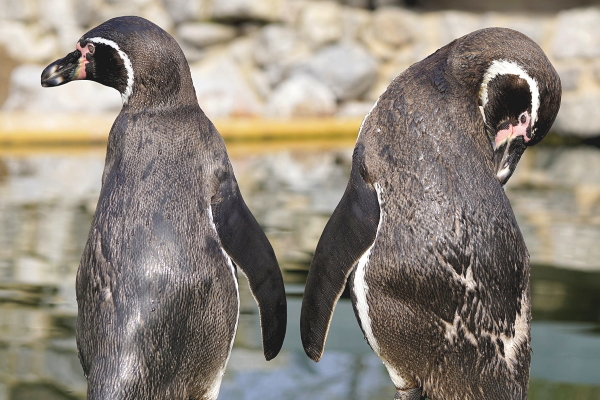 Piranhas: These carnivores from the Amazon region are of course a must in a large aquarium. There are at least two fish tanks with piranhas at the Genoa Aquarium.

Native fish: Several tanks are dedicated to animals from the Mediterranean. You can see barbels, parrotfish, corals, sardines, perches, etc., among others.

Jellyfish: A whole room with several tanks, we found great, good to photograph.

Fish to touch: The petting pool is a great idea, especially for kids

Japanese giant crabs: These creepy animals can grow to several metres in size.

There are also supposed to be crocodiles (large Nile crocodiles) in the Genoa Aquarium, but we didn’t see them, probably missed them. There are many other animal species, especially fish. More than 600 species in total, also many smaller animals, everything from goldfish to sea cats.

Barcelona also has a similar aquarium directly at the harbour in the city centre: More info

Munich also has an aquarium of the Sea Life chain: More information

By the way, the largest aquarium in Europe is in Valencia (Spain): more info, the one in Genoa described here is the second largest.