Cinque Terre is a stretch of coast in the north-west of Italy in the region of Liguria. Translated, Cinque Terre means “Five Places” or “Five Villages”. This refers to the five picture-book villages along the 12-kilometre coastline that make up the Cinque Terre. The area is a national park and UNESCO World Heritage Site. In season, many thousands of hikers and day tourists visit the 5 villages every day. There is a train that frequently connects the villages. The train leaves from the very nearby large town of La Spezia. 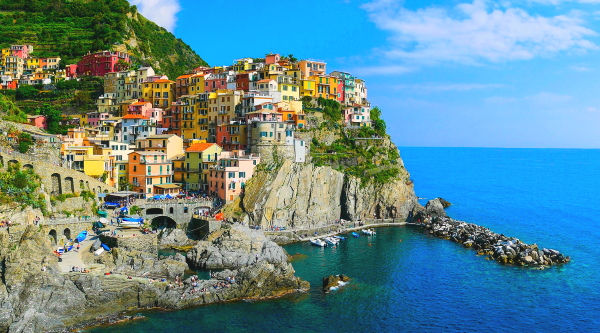 The five villages from north to south are Monterosso, Vernazza, Corniglia, Manarola and Riomaggiore. The large city of La Spezia lies a few kilometres south outside the Cinque Terre. The most beautiful and most visited village is Varezza. But the other villages are also wonderful and more than worth seeing.

Very popular in the Cinque Terre region is hiking. The villages are only a few kilometres apart and are connected by hiking trails. Cinque Terre is situated on a steep coast. On the hikes you see beautiful landscapes, the villages on or above the sea and grandiose coasts. You walk through vineyards and olive trees. Most of the time, the path runs far above the coast. Absolutely recommendable hiking area! The only disadvantage is the many other hikers, often the area is completely overcrowded. We recommend avoiding the high season. In the 21st century, the Cinque Terre is anything but an insider tip. 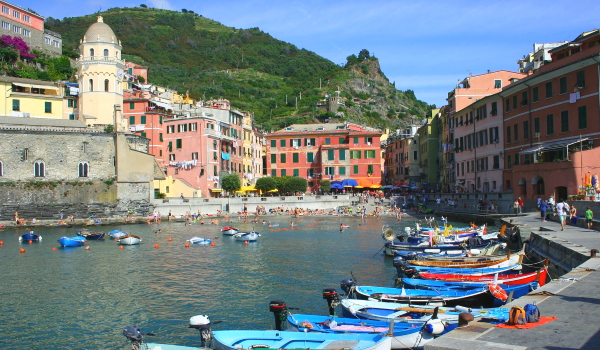 The 5 Villages in the Cinque Terre

Monterosso al Mare: This beautiful village of 1,200 inhabitants is the northernmost of the 5 villages of the Cinque Terre. It consists of an old village and a new village, the railway station is in between. There is a rock in which a tunnel has been built for pedestrians to the old village. On top of the rock is a tower. Well known in Monterosso is the big stone sculpture “Gigante”. The giant (translation of Gigante) was badly damaged in a storm a few decades ago. There are more hotels here than in the other towns and the most famous beach in the Cinque Terre. Many Italians and US-Americans come to Monterosso al Mare among other things because of the good and well-known restaurants (fish, seafood). >>> More info

Vernazza: The second village (population 800) is the most famous village of the Cinque Terre. In summer Vernazza is full to bursting with tourists. As everywhere in the Cinque Terre, these are especially many US-Americans. Vernazza is perhaps the most beautiful village in Italy. Narrow streets, colourful houses. The small harbour is the centre. The main street connects the harbour and the railway station. Great little taverns. >>> More info

Corniglia: The middle of the five villages. Corniglia is the only village not on the sea, but on a rock about 100 metres above sea level. There is a great viewpoint in the village. There are many vineyards around the village. In Corniglia you can taste and buy wine from the local winegrowers. Perhaps the village with the fewest tourists. >>> More info

Manarola: Here it is rather quiet. You can swim in the sea in the small harbour. Very narrow alleys and many stairs in the narrow village. Many painters and other artists live in Manarola. The footpath between Manarola and Riomaggiore is the famous section of the walk between the villages of the Cinque Terre. This path is called Via dell’Amore (Love Path or Love Trail). Unfortunately, it is closed until 2022 due to the consequences of a storm. But you can walk along it from Manarola and then turn back. >>> More info 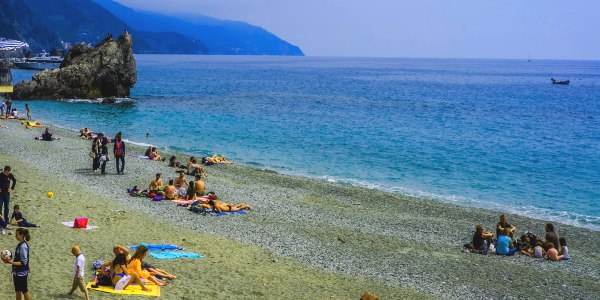 In the season there are also boats (ferries) between the villages. But you can also take the train. The whole Cinque Terre coastline is only 12 kilometres long. Walking between the villages is easy. In some places the paths are rough and steep, but manageable. In fact, the scenery and views along the hiking trails are the great highlights of Cinque Terre.

Cinque Terre beaches: Many tourists come to the Cinque Terre for the landscape and the romantic villages. But many also want to swim in the sea. There is a real, long beach in Monterosso al Mare, the northernmost of the 5 villages. But there are also bathing possibilities in Vernazza, Manarola and Riomaggiore. In Corniglia there is no coast and therefore no beach, the village is not directly on the sea.

Accommodation Cinque Terre: There are guesthouses and private rooms in all 5 towns. Most hotels are in Monterosso, the northernmost village. Accommodation prices in the Cinque Terre have risen considerably in recent years. A cheap, simple private room is most likely to be found in the southernmost village of Riomaggiore. The most expensive is probably Vernazza, the dream village of many wealthy Americans.

The whole path between all 5 villages is officially 12 km long. But it seemed a bit longer to us. The pure walking time is about 4 to 5 hours. Since almost every hiker takes a break in every village, it takes much longer. If you want to visit all 5 villages on foot, you should perhaps spread it over two days. Of course, you can also walk only a part and take the train or a ferry between individual villages. The most beautiful and easiest part of the Cinque Terre trail is between the southern villages of Manarola and Riomaggiore. The hiking trail here is also particularly easy. Many lovers walk this romantic section at sunset. Further north, the hiking trail often goes steeply up and down. But as an average person without walking problems, you can manage this.

For the most part, there is a fee for the hiking trails (entrance fee to the national park). There is a Cinque Terre Card. You can get it at the entrance to each section of the trail. In 2020 it costs 7.50 for one day or 14.50 for two days. There is also a card with walking and train for about twice the price. There are discounts for children, senior citizens and families. With all cards you can also use various buses in the national park. There is not only the 12-kilometre path along the coast between the villages. In the Cinque Terre National Park (Parco Nazionale delle Cinque Terre) there are about another 100 kilometres of hiking trails in total. If you don’t hike but just visit the villages, you don’t need to buy a Cinque Terre Card. Single train tickets are cheaper if you only use the train 2 or 3 times a day.