Many tourists come to Riva del Garda, the town has a lot to offer. The old town is worth seeing. In general, the town is a mixture of Austria and Italy; until a good 100 years ago, Riva del Garda belonged to Austria. 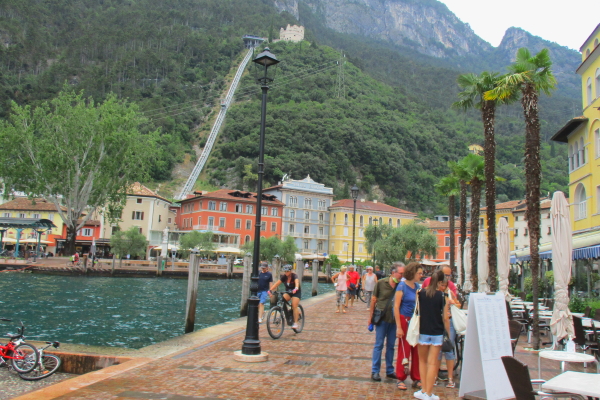 As Riva is situated between the lake and the mountains, both water sports and mountain sports enthusiasts come to the area. The winds for sailing in northern Lake Garda are good. That is why many surfers also come.

In the mountains around Riva del Garda, hiking and mountain biking are very popular. The place is also much visited by people crossing the Alps. Riva del Garda is considered the southern endpoint of the Alps. Thus, it is the starting point or end point of Alpine crossings on foot or by bike.

When Riva del Garda still belonged to Austria, the town was called Reiff. Even then it was a well-known health resort. There are palm trees everywhere in the town. Those who come to Riva from the north have the feeling of having arrived in warm Italy.

The beaches of Riva del Garda are also very popular with holidaymakers, especially from Germany and Austria. Lake Garda is less than 100 metres above sea level. Coming from Germany and Tyrol via the Brenner Pass, Riva del Garda is the first place with a warm, Mediterranean climate. Many also come to Riva only for the weekend, for example from Munich.

The central square is called “Piazza 3 Novembre” or “3rd November Square” and is on the shore of Lake Garda. There are some great cafes and restaurants here. Especially in the evening there is a lot going on here. Ideal for an Aperol Sprizz or a coffee. However, prices in the centre of Riva del Garda are quite high, especially in restaurants. 3 November 1918 was the day of the armistice at the end of World War 1 between Austria and Italy.

About 100 metres further east along the shore of the lake is the large castle of Riva, which is completely surrounded by water. The town castle “Rocca di Riva” is also called a water castle. Today, the castle of Riva del Garda houses a museum for the region. It is worth visiting the large exhibition (5 euros adults in 2022, MAG Museo opening hours daily from 10 am to 6 pm). Great museum of local history.

Just a few metres from the moated castle of Riva del Garda is Reptiland. It is a small zoo for reptiles and spiders in an old building. The focus is on dozens of different snakes from all over the world. We found 9 euros entrance fee for the small animal exhibition a bit too expensive (2022) . The reptile zoo in Riva del Garda should also be renovated. 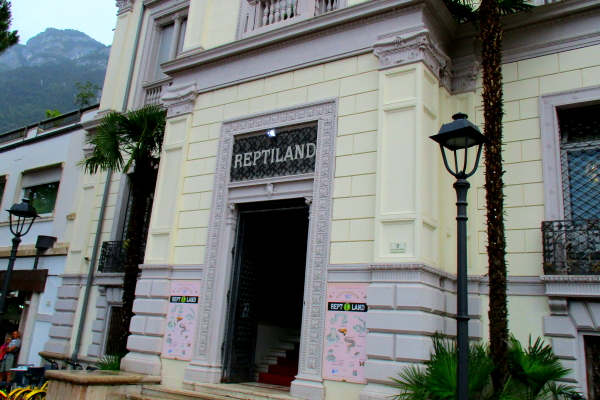 The many old buildings in Riva del Garda are beautiful, reminiscent of the time of Austria. In the nice pedestrian zone there are many small shops with fashion, souvenirs and other things.

A special sight in Riva del Garda is the fortress Bastion (Il Bastione) a few hundred metres above the town (see picture at the top). You can take a lift up to the fortress (about 6 euros return) or walk up on a steep footpath. The grey bastion from the 16th century is a ruin and does not charge an entrance fee. But the grandiose thing is the view from the bastion over Lake Garda and the surrounding area.

Parking in Riva del Garda is not expensive, most car parks around the centre don’t cost much more than 1 euro per hour. Even in high season in July, we easily got a parking space about 200 metres from the central square 3 November.

The town of Riva del Garda does not have a train station. However, it is easily accessible from other towns around Lake Garda by many ferries and by bus. Lake Garda is known for good ferry connections.