In this article you will find all important information for visitors of Pompeii (currently for this year 2020 and 2022).

Ancient Pompeii is one of the most important sights in the world. The ancient city was completely buried during the eruption of the volcano Vesuvius in 79 AD. In the last centuries archaeologists have excavated large parts of the city. Many things like houses, streets, shops, pictures, statues and even the bodies of the former inhabitants are very well preserved. You can see all this today. For many tourists this is the absolute highlight of their holiday.you

More than 2 million visitors come to Pompeii every year and the number is rising. Also many tourists from Asia visit the excavation. Also earlier visitors came in smaller numbers, Goethe and Mozart were e.g. in Pompeii. The well over 10,000 visitors per day in summer lead to a big crowd in the important buildings. For example at the famous antique Brothel Pompeii you often have to queue for a long time.

The waiting times at the entrance to the excavation are often even worse. That’s why you should buy your ticket online beforehand: On this link you find Pompeii Tickets

Today’s Pompeii is a small town with about 25,000 inhabitants. Many inhabitants live from tourism. Almost all visitors come to Pompeii to visit the ancient excavation site.

Both spellings Pompeii and Pompeii are possible in German. More often the ancient city Pompeii is written, the modern small town Pompeii. In Italian there is only the spelling Pompeii, the ancient city can also be called Pompei antica. In the tourist language English there is also the designation Pompeii with double-i at the end.

The ancient city of Pompeii is fenced and can only be visited with a ticket. The sightseeing is open almost every day of the year. Normal opening hours are 8:30 to 19:30. From November to March opening hours are only 17:30.

Some rules for visiting Pompeii

Dogs: You can’t take big dogs with you, small dogs are ok according to an employee. But you have to keep the small dogs on a leash everywhere and take them in your arms in the buildings. Caution: According to many tourists, there are wild dogs in Pompeii that are sometimes said to be aggressive. This apparently applies especially to the less visited areas of the huge excavation.

Luggage: Suitcases or backpacks are not allowed. Probably for fear of terror attacks this is handled quite strictly. This applies to bags and other pieces of luggage larger than 30 x 30 x 15 cm. That is not much. There is the possibility to drop off the luggage, but the possibilities are limited by the crowds. So it is best to bring only a small bag or rucksack to Pompeii. 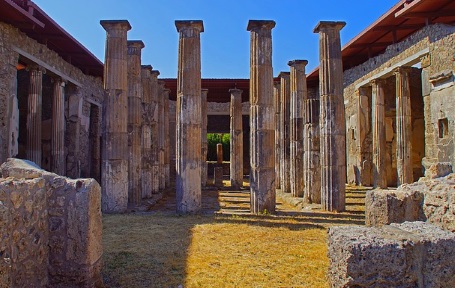 Disabled: By far all areas of the excavation of Pompei, but some major roads, are suitable for wheelchair users and people with walking disabilities.

There are several entrances, from different stations it is not far to the entrance. 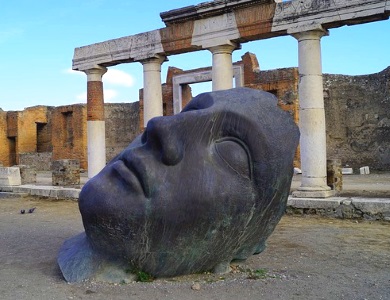 Also many normal trains of the Italian railway stop in Pompeii at another station. From here it is a few hundred metres more to the entrance to the ancient city.

The marker is on the Anfiteatro entrance. You can also find the 3 railway stations on the map. To the right of the entrance is the station of the normal Italian state railway. The main entrance is on the left at the station “Pompeii Scavi – Villa dei Misteri” (train Circumvesuviana to Sorrento).

There are also several buses to Pompeii. The small town is very well connected to the local traffic and long-distance traffic, the big sight is almost in the centre of the today’s small town.

If you want to visit the old Pompeii today, you have to pay admission and observe the opening hours. There are several entrances. Pompeii is easily accessible by public transport. There are 3 railway stations (different railway lines) not far from one of the entrances.

Entrance at Pompeii Villa Dei Misteri station: This entrance is almost next to a train station. Trains from the centre of Naples and the tourist city of Sorrento stop here several times per hour in the other direction. This train belongs to the Circumvesuviana system, a kind of local train of the region south of Naples.

Station Pompeii Santuario: This station is in the modern city of Pompeii. Here stop the trains of Circumvesuviana the line Naples – Poggiomarino. To the entrance “Piazza Anfiteatro” of the ancient excavation it is a good 10 minutes walk from this station.

Pompeii Santuario Station: This is the station of the normal long-distance trains of Pompeii. There are direct trains from Naples and Salerno, for example. This station is also in the centre of the modern city of Pompeii. From here it is a 15 minute walk to the entrance “Piazza Anfiteatro”.

Why is Pompeii the most important ancient excavation in the world?

Pompeii was a modern, rich and very lively city on the day of the catastrophe 24 August 79 AD. The volcanic ash covered the whole city many meters high in a few hours. Many things were preserved extremely well under the ashes until the excavations in the last centuries. Things like corpses, pictures, writings on walls, restaurants, pubs, swimming pools, brothels, shops and much more are extremely well preserved.

This is why Pompeii is so interesting for both scientists and laymen. Nowhere else in the world are there so many well-preserved antique objects and buildings. The excavations are far from finished. Almost every year new, spectacular things are discovered in Pompeii. Many finds from Pompeii are exhibited in the Archaeological Museum in Naples. Therefore, you should definitely visit this museum. 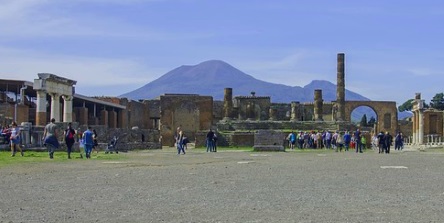 What you should definitely see in Pompeii (examples):

Forum: The most important place of the city was the Forum. It served, for example, as a marketplace and meeting place. Here are for example a market hall, shops, a temple, a basilica, statues and much more.

Thermal baths Pompeii: The ancient Romans loved bathing. Pompeii, for example, had several swimming pools, saunas and the like. They are partly well preserved, also the antique technology for example for the warm water is very interesting.

Villas: You should definitely see some houses of the rich families of Pompeii. Here you can see down to the last detail how you lived in the past. Many things are not as different as today. You discover many small things as for example a sign “Warning of the dog” (of course in Latin).

Temples: In different temples you learn a lot about the religion in pre-Christian Rome.

Theatre Pompeii: There were several theatres like the Great Theatre, the Small Theatre and an Amphitheatre, very interesting for visitors.

Brothel: The most visited tourist building in Pompeii is a brothel (Lupanar). There were probably several dozen such brothels, the one in the center is very preserved. You see among other things the execution rooms, pictures with sex motives and inscriptions. The prostitutes were slaves, often from oriental provinces of the Roman Empire. Today, visitors to the excavation often have to wait long in line to get to the brothel.

Water supply: There was a supply of water throughout the city, mostly through lead pipes. Rich people had a real water connection. The rest of the population got water in wells, which can be seen everywhere in the excavation. Over 40 ancient wells have been uncovered so far. Each inhabitant could simply get water from the wells. The sewage flowed in the antique Pompeii about the roads into the sea.

You get a great insight into the life in the antiquity. You have the impression to be in a city in the year 79 after Christ. For many visitors Pompeii is the best museum in the world. No other ancient city in the world is so well preserved.

By the way, Vesuvius has erupted about 30 times since the great catastrophe in the last 2000 years. So the volcano erupts about every 70 years, not since 75 years. Purely statistically an eruption in the next years is conceivable. The last eruption was in the 2nd World War 1944. At that time the summit of the mountain was blown away.

Our articles about Pompeii and Herculaneum