Scorpions occur in many countries of the world. Mostly the animals live in warm regions. In cold countries, on the other hand, there are hardly any scorpions. In Europe, scorpions live in the Alps and further south, and there is also a species in Austria and Switzerland. In Italy there are about 5 to 7 species of scorpions. According to our literature sources, only 2 of these species exist in the region of Tuscany. 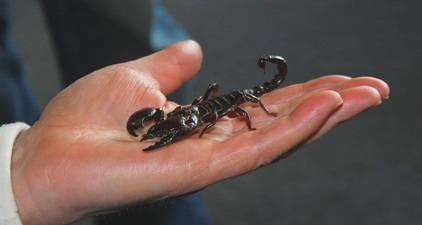 Of the approximately 2,300 known species worldwide, only a maximum of 50 species of scorpion have a poison that can kill humans. The scorpions found in Europe do not belong to these dangerous, very poisonous species. Although all scorpions in Europe have poison, a sting is usually not life-threatening.

An exception can be allergy sufferers: A scorpion sting can, like a wasp sting or a bee sting, trigger life-threatening allergic reactions. According to our literature, however, this is rather rare. A stick is usually harmless. Local swelling can occur, for example. If you are stung by a scorpion in Tuscany or elsewhere in Italy, you should consult a doctor. The stings can be very painful.

Other toxic animals in Tuscany

>>>>> Snakes in Tuscany (poisonous snakes and other snakes)

What types of scorpions are there in Tuscany and Central Italy?

According to our research only scorpions of the genus Euscorpius exist in the middle of Italy. Most of the 17 Euscorpius species can be found in Europe. All Euscorpius scorpions have a rather weak poison. Of the 17 species, 2-3 live in Tuscany.

Euscorpius italicus: This scorpion species occurs from France to Russia. In Italy the animals live mainly in the northern half including Tuscany. They also like to come into houses, you see them relatively often in Tuscany, also in cities. Scorpions of the species Euscorpius italicus rarely have a length of more than 5 cm. They are brown, also red-brown or blue-black. 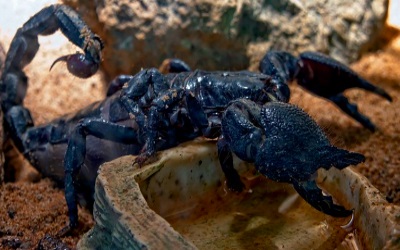 Picture: A scorpion probably of the species “Euscorpius italicus

The underside is usually somewhat lighter. If you meet a scorpion in Tuscany, it is mostly an Euscorpius italicus. The poison of this arthropod (animal class in biology to which scorpions belong) is not very strong for humans. However, humans react to poison very differently, there are also allergies to the scorpion poison.

Euscorpius sicanus: This is a third species of the Euscorpius scorpions which, according to some literature sources, is found in Tuscany and in the centre of Italy. Also this species does not seem to be much more poisonous than the two species above. Unfortunately, we have hardly found any information about this species. For example, there is no Wikipedia article, not even in Italian or English