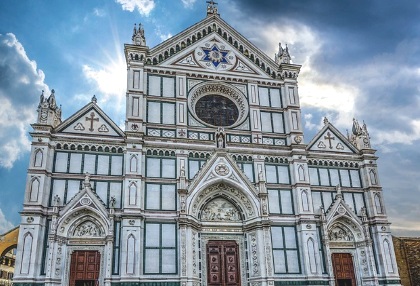 Santa Croce is translated into German as “Holy Cross”. So the church can also be called the Basilica of the Holy Cross. There are also snakes at the entrance in summer, but mostly not for hours as at some other sights in Florence, as at the cathedral or at the world-famous art museum Uffizi Florence.

The interior of the Santa Croce Basilica

In the church is a good plan with the most important works of art and tombs. Michelangelo, Dante and Galileo Galilei are buried in the three very important tombs 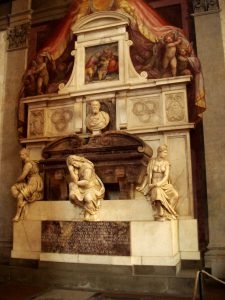 All three are absolutely worth seeing. They are side by side or opposite each other near the main entrance of the basilica (as an entrance of paying church visitors one enters the building at a side entrance). But the grave of Dante is probably only a sham grave, in reality he is buried in Rave

Caution: As a tourist you are no longer allowed to drive to Florence: More info 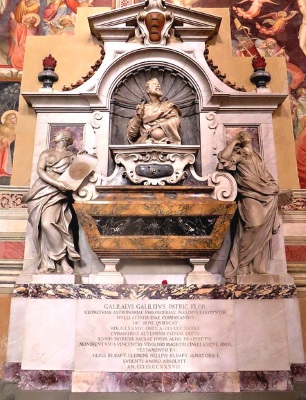 The tomb of Galileo

The Basilica of Santa Croce is a very large church with great large paintings on the walls. The colorful glass windows are also beautiful. Very famous is the crucifix of Cimabue from the late 13th century. One should also have a close look at the high altar.

After visiting the Church of the Holy Cross in Florence, you can visit the Museum of the Basilica and some of its annexes with exhibitions. You will automatically pass behind the exit. Everything can be visited with an entrance ticket to the Basilica.

Admission to the Basilica, including the Santa Croce Museum in Florence, costs 8 euros for adults. Teenagers between 12 and 17 years pay 6 Euro, children up to 11 years do not have to pay the entrance fee. For example, disabled people with a companion do not have to pay admission.

Family ticket: Families only pay the entrance fee of their parents, i.e. 16 Euro.

The entrance is on the side of the church (well signposted). You pass through a small bookshop in front of the entrance and through the Basilica Museum, which is included in the entrance fee.

Guided tours through the church are very popular. There are many things to see that are difficult for a layman to understand. An excellent guided tour (length about 90 minutes) in English or Italian can be booked on this website.

Especially because of the graves, the Holy Cross Basilica is one of the great sights in Florence for us.

The opening hours of the Church of the Holy Cross are daily from 9:30 to 17:30. On Sunday the church service etc. is only open from 14:00. This also applies to many holidays.

Construction began around 1294 and the foundation stone is said to have been laid by the famous Francis of Assisi himself. It is the largest Franciscan church in Italy. The façade from the middle of the 19th century is neo-Gothic and made of marble.

Many of the frescoes in the Basilica of the Holy Cross in Florence are by Giotto, but by far not all of them are included (the pictures of Giotto are from about 1320 to 1330, near the altar). The picture below is the most famous fresco by Giotto in the Basilica in Florence called “The Death of Saint Francis”.

St. Stephen’s Cathedral Vienna is the most famous church in Austria.